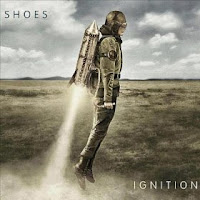 Their first album since 1994, Shoes return to the pop and rock fray with a record that shows maturity, but also the upbeat charm and enthusiasm that’s been a trademark characteristic, from their living-room recorded, power pop debut, released in 1977 at the height of punk, through their major label period, and the years of intermittent independent releases that followed.

I recognise it almost seems silly to point out that they still sound like the Shoes, but when a group’s been silent for so long, fans worry that something will have been lost over the intervening years. Fortunately, everything’s as it should be; beginning with Klebe’s “Head vs. Heart”, a lively, vivacious track with great vocals (and guitar) and an instant reminder of their pop smarts.

Group composition, the swaggering “Hot Mess”, suggests the Stones are as much an influence as the Beatles, and the song that initially sparked their reunion, Jeff Murphy’s “Out Of Round” takes the quartet out of their guitar-pop comfort zone. A study on loss, it’s delivered with genuine sadness - and ELO-style harmonies.
www.shoeswire.com
Phil S.