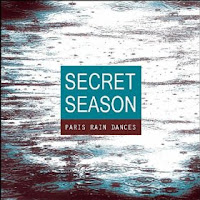 Parisian duo Secret Season - Mark Moogalian on vocals, guitar and percussion, and Isabelle Risacher on vocals, keyboards and flute – originally began playing music together in 2005, though Secret Season were only officially launched in 2009. Beyond the group, both were (and still are) involved in various artistic pursuits. Moogalian, originally from Richmond, Virginia, played in a couple of bands, is an exhibited sculptor and in 2009, finished his debut novel. Parisian, Risacher, is a talented photographer, paints and writes poetry.

Their debut “On Our Own” was released in early 2011, and “Paris Rain Dances” followed promptly in August 2012. In the gap between the two records they toughened up their sound, incorporated a little blues, and frankly, rock a little harder than before. Fortunately they’ve sacrificed neither songwriting nor accessibility along the way, and they’ve come out the other side with a sound and style that will remind many of the New York groups of the late ‘70s and very early ‘80s, though they’re not quite that easy to pin down – and that’s often down to their bluesy edge.

First track “In the Beginning Right Now” is a prime example. Moogalian’s Tom Verlaine-esque vocal when coupled with the song’s blues-rock backing is an intriguing anomaly, but utterly convincing. Risacher’s accompanying vocal adds to the complex charm. “Goin' Back Again” is a cool take on Lou Reed’s conversational style, though “Ana Naki” is something else altogether. Arty and askew, its roots can probably be found in the European experimental post-punk scene, rather than the Bowery bars and Southern roadhouses of the US.
www.secret-season.com
www.facebook.com/Secret-Season
Secret Season CD Baby Page
Phil S.