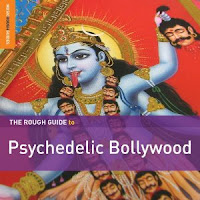 As the World Music Network continues its vast cataloguing of cultural and historic “rough guides” one wonders what the inclusion criteria might be. If we assume a quick forage for ‘60s or ‘70s Indian soundtracks that lean to the west for a touch of the unusual, a John Barry influence and centre around a select few Indian film score composers, then we may have it.

The collection starts in a good funky place with “Pyar Zindagi Hai” from Lata Mangeshkar, Asha Bhosle and Mahendra Kapoor. The tracks then continue in a vein which display obvious influences from non-Bollywood sources, such as Kalyanji Anandji’s instrumental “Cabaret Dance Music” - which recalls Bruce Lee’s Enter the Dragon score – and the beat group-esque “Dance Music” adds a touch of east meets west(ern). Equally, there are times when the tunes share a space with the ‘60s French music scene, that often used sitars to psychedelicise their sound.

As for disc 2 from “Ek Ladki Ko Dekha” on by Kumar Sanu, the going gets mellower with tracks that are nearer to traditional Bollywood songs or ragas and seem more filler than killer!

For 27 Tracks over two discs the price will surely be nice. Some of the recordings are a little low quality and not everything will interest the psych connoisseur, but it does have its moments.
www.worldmusic.net
Willsk