Review: Ben Valasek and the Growlers – Time Waits For No One

Ben Valasek and the Growlers – Time Waits For No One (Independent) 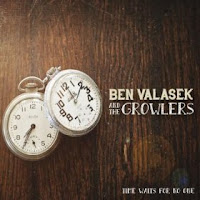 Ben Valasek describes himself as a veteran of his local Pittsburgh scene, though frankly he doesn’t look old enough for that particular descriptive moniker - although he’s certainly an experienced musician and performer. He’s been involved with various groups including Distinguished Gentlemen, Common Ground and The Awakening Ritual and he’s shared a stage with a long list of well-known bands and artists. In 2010 he released a solo album, “Under The Peach Tree”.

The Growlers, Zach Wolfe, Michael Starr and Ron Leard, bring both accomplished musicianship and an appreciation of the Allman Brothers, Led Zep and the Grateful Dead to the project, and their influence provides a retro ‘70s feel to the recording which is incredibly appealing. Of course, Valasek’s songs provide the album’s core, and words and music mesh perfectly on “Time Waits For No One”, insofar that Valasek understands the value of a sticky chorus and a hook or two. The nine songs collected here lack neither.

They begin with “Walk On the Water”, its stripped intro soon giving way to a chugging rhythm section and a gently picked electric guitar. A midpoint guitar solo shifts the song up a gear and the result is a cracking introduction. It’s followed by the title track, a rumination on the passing of time and “Drinking for One” is an old fashioned country tearjerker given a classic rock makeover – and is that a cello in the background? Towards the end “Three Sides” provides a pristine blues-rock standout that is both languid and vital, and final cut “Count Your Blessings” ends the album on a folk-rock high.
www.benvalasek.com
www.facebook.com/BenValasekAndTheGrowlers
Ben Valasek CD Baby Page
Ben Valasek & The Growlers CD Baby Page
Phil S.