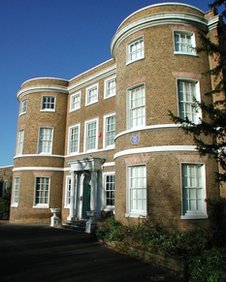 The William Morris Gallery in north-east London has won this year's £100,000 Art Fund prize for Museum of the Year following a £5m renovation.

The Walthamstow gallery was praised for its community outreach and for "setting the highest standards of curatorship".

A second prize, of £10,000, went to the Hepworth gallery in Wakefield for its "world-class" education programme.

The winners were announced by Private Eye editor Ian Hislop on Tuesday at the Victoria and Albert Museum in London.

Born in 1834, William Morris was one of the principal founders of the British Arts and Crafts movement, a pioneer of the socialist movement in Britain and a writer of poetry and fiction.

His world-famous designs for wallpaper and patterned fabrics are now housed in the home in which he grew up.

The gallery opened in 1950 but faced closure in 2007 before securing funding for its redevelopment.

"Its extraordinary collections, beautifully presented, draw the visitor engagingly through Morris's life and work and through the building itself," said the judges.

The Art Fund prize, now in its 11th year, rewards "innovation and creativity in bringing objects and collections to life".

Other nominees this year included the Baltic in Gateshead, Narberth Museum in Pembrokeshire and the Kelvingrove Art Gallery in Glasgow.

Stephen Deuchar, director of the Art Fund and chair of the judges, said the 10 finalists had set "world-class standards" despite concerns about public investment and arts funding in the UK.

"Important and beautiful collections and their visiting publics are being brilliantly served across the country," he continued.

"The prize intends to draw attention to this national success story."