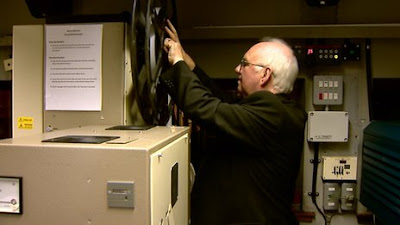 Barney McCue, one of the last projectionists in Scotland, is retiring from the job after 32 years at the Glasgow Film Theatre

Cinemas are as popular as ever but projection of 35mm film stock has almost completely disappeared in recent years, with the rise of digital projection. Projectionist Barney McCue has decided now is a good time to roll the end credits on a career spanning half a century.

Barney McCue may not have had the cinema in his blood but it was definitely in his home.

He was born in a tenement flat above the Grand cinema in the Cowcaddens area of Glasgow.

"There was no back court so when you went up the back stairs to the building there was a projection room and the door was always open so you could peek in and see the projectors," Barney says.

And when he left school in 1964 he started a career which would see him through the next five decades.

"You had to do a three-and-a-half year apprenticeship at the beginning."

In those days it was a "very hands-on" job with the reels of film being changed every 20 minutes.

"But the audience did not notice the changeover because it was just another change of scene," he says.

"There were little dots or cues on the right-hand side of the screen that told the projectionist to change over."

He says it was quite an "art" to "unconsciously" watch the movie while dealing with the other reels.

Barney worked his way through a number of Glasgow's long-gone ABC cinemas until taking charge of the flagship Sauchiehall Street picture house which became an early version of the multiplex when it converted to five screens in 1980.

The task of keeping all those screens running occasionally led to the sight of Barney trying to get the film back on to the spool after it had come off the projection table and gone snaking on to the floor.

The following year he moved to the Glasgow Film Theatre where he has been for the past 32 years.

He remembers one of the first films he projected was 1900 by Italian director Bernardo Bertolucci.

"I remember that because it runs about four hours and there was a whole pile of reels to be made up by hand," says Barney.

"I had worked for the circuits where we had motorised rewinders and large reels. I came here and it was like going back 20 years into the past."

But Barney says it is all part of the fun of film projection, which he describes as a "hobby with pay".

The GFT has always been a step aside from the mainstream commercial multiplex but it has seen a number of revamps since Barney started, including the addition of a second screen.

The film theatre has increased its programme and caters for a more independent film-going audience but even it had to admit that digital was the future.

"A few years ago we changed upstairs and put a digital projection in and we were running 25% digital," Barney says.

"Eventually we put a second projector in downstairs and the transition was amazing. It was like 90% overnight."

Now, the film projectors are only used when digital prints of films are not available, perhaps for film festivals.

And for Barney, whose wife Sadie is also retiring from the GFT, the hands-on excitement has gone from film projecting.

"With digital it is all programmed up. It does what a projectionist used to do. You would bring the lights down, open curtains, focus, set sound etc.

"Eventually you did not even have to press a button - it was all scheduled on a timer.

"I felt you lost the art of that, you know. There did not seem to be the same excitement eventually."