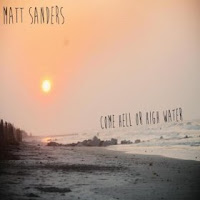 Singer-songwriter Matt Sanders has been playing guitar since his early teens, growing up in the mountains of East Tennessee and listening to James Taylor and Billy Joel. He began writing music and songs almost immediately, recording a single, “Regrets” while still in High School and continuing to discover new songwriters to inspire him, especially Damien Rice and Amos Lee. He recorded and released his debut album in 2010, “Apathy Has Found Us Again”, and in the same year he headed out on the road with The Band Perry, as guitar technician for the high-flying country trio.

“Come Hell Or High Water” was recorded within a group setting, and both Sanders and his songs seem invigorated by the process. His sound and style is contemporary, alternative folk, both soulful and emotionally open, so it’s important that plenty of space is made for his songs to breathe. That’s been achieved with a level of subtlety and restraint that credits the artist, his band and the production team. Opening cut, “Train Wreck” makes for a perfect start, its rolling rhythm underpinned by steady keys and Sanders’ watertight lyricism. “It's You” indicates a willingness to try new things, as willful brass and percussion lay an unstable foundation for what is probably Sanders’ finest vocal, and “Ocean Tide” is equally impressive with it’s tumbledown jazz inflection.
www.facebook.com/mattsandersmusic
www.cdbaby.com/Artist/MattSanders
Phil S.