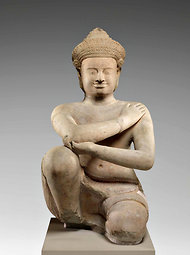 Two 10th Century Khmer statues, believed to have been looted from a temple in Cambodia decades ago, have been sent back from the United States.

The life-size sculptures, known as the "kneeling attendants", had been displayed at New York's Metropolitan Museum of Art for nearly 20 years.

The museum pledged to return the artefacts after evidence suggested they had been illegally exported.

A ceremony was held at Phnom Penh airport to welcome them back.

Cambodian officials hailed the return journey of the sandstone sculptures as a "historic" moment for the country.

Buddhist monks chanted blessings during the ceremony, which was attended by government officials as well as executives from the Metropolitan Museum of Art.

The statues are believed to have been stolen from the Koh Ker temple 80km (50 miles) north-east of Cambodia's Angkor Wat temple complex in the early 1970s at the height of the country's civil war.

The museum announced its decision to return the statues in May after extensive consultations with the Cambodian authorities.

"The museum is committed to applying rigorous provenance standards not only to new acquisitions, but to the study of works long in its collections in an ongoing effort to learn as much as possible about ownership history," museum director Thomas P Campbell said in a statement at the time.

The Cambodian government is also pursuing other artefacts it believes were illegally removed the country in recent decades.

The Metropolitan Museum of Art has returned artefacts to Phnom Penh before - in 1997 it sent back a 10th Century Shiva's head it had been given.