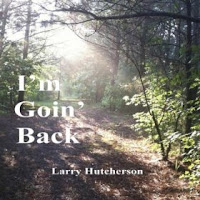 There’s a certain dependability to North Carolina based Larry Hutcherson’s “I’m Going Back”, which is reassuring and extremely heartening. The veteran guitarist-singer-songwriter has been playing professionally since the mid-70s, and if you take the time to find it, there’s a list out in the ether of former band-mates, current musical collaborators and artists he’s jammed with over the years that’ll get the little hairs agitated on the back of the neck of most rock fans.

For all his years in and around the ‘business’ there’s not a great deal of recorded music to be found – especially solo records. He released “Some Get Lucky” in 1994, but we’ve had to wait almost two decades for the follow up, “I’m Going Back”, a ten-track album that can be filed loosely under Americana, though it’s an old-school version of the genre, which owes more to The Band, late Byrds and Neil Young, rather than contemporary indie artists who’ve adopted various roots and/or Americana traits.

It’s a rock solid collection, which showcases Hutcherson’s easy way with country-rock and blues, and his seemingly effortless musicianship and vocals. Beginning with “Pass the Memories”, its mellow, country-folk-rock tone is ideally suited to the song, while the production harks back to the best of the early 1970s. “Back to the Blues” is just that, and “Out of Town” will please fans of John Hiatt and Elvis Costello. “Stolen Heart” might be my favourite – it’s Springsteen-esque harp and Gene Clark phrasing is difficult to beat.
www.larryhutchersonmusic.com
www.reverbnation.com/larryhutcherson
Larry Hutcherson CD Baby Page
Tony S.

Learn how to put a song on itunes at ReverbNation.com