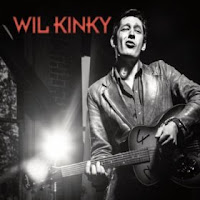 Born and raised on a blueberry farm in Oregon, Wil Koehnke (aka Wil Kinky) began playing music in his early teens. Now he’s in his early twenties and a regular feature on his local Portland scene, playing both solo and with various groups, including Urban Sub Allstars and the Kinky Brothers. When he’s not gigging, he’s teaching guitar and piano, and this, his self-titled EP, is his debut release.

For all his musical talent, and there’s plenty of it, it’s his rich, vibrant voice that makes an immediate impact, and perfectly suits his rootsy, soulful songs. He’s been compared favourably to established artists like John Mayer and Ray Lamontagne, but there’s enough passion and fervor to these seven tracks to suggest, not only is Kinky / Koehnke his own man, but with the right breaks he can make much the same commercial impact.

There’s a nice variety of material here, from the rolling, catchy-as-hell, opening track “It's Alright” to the organic Steve Winwood-esque soul groove of “The Energy Between (Me and You)” and “Dreams I Leave Behind”. In between, on “Seeds We Sow” in particular, he appears to harness Richard Hawley’s retro croon with a little John Martyn on the side, which, you probably wont be surprised to learn, sounds just fine.
www.wilkinky.com
www.facebook.com/Wil-Kinky
www.reverbnation.com/wilkinky
Wil Kinky CD Baby Page
Phil S.