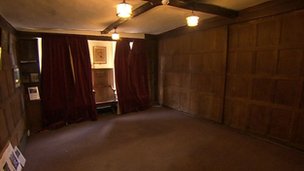 The Painted Room would have been used by the
tavern's special guests, the preservation trust said

Campaigners hoping to preserve a room in a former inn, believed to have been used by William Shakespeare, have received a cash boost.

The Painted Room is all that remains of the Crown Tavern in Cornmarket, Oxford.

A £30,000 grant from English Heritage is expected to be used for initial conservation work on the building's structure and the room's original Elizabethan wallpaper.

More than 700 people attended public tours of the Painted Room in April, when the trust temporarily opened it to mark Shakespeare's birthday.

The Crown Tavern was owned by John Davenant who was a friend of Shakespeare, according to the trust.

Shakespeare is said to have stayed there on several occasions while travelling between Stratford-upon-Avon and London.

The preservation trust said the Painted Room would have been used by special guests.

The room, above the current Republic fashion shop, features Elizabethan wallpaper, which was discovered hidden behind oak panels in the 1920s. 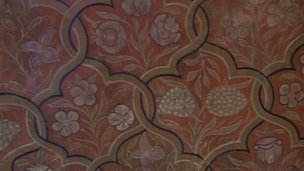 English Heritage's David Brock described the wall paintings in the room as "extraordinary".

"We hope our grant will lead to a better understanding of the historical significance of this building and help ensure it has a viable future," he added.

The Oxford Preservation Trust hopes to manage the property, which is currently owned by the city council, and open it to the public.