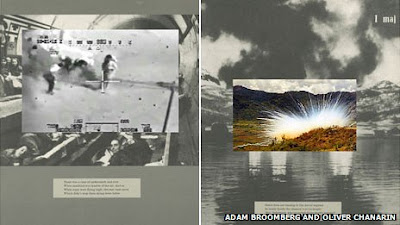 Adam Broomberg and Oliver Chanarin have been awarded the 2013 Deutsche Borse Photography Prize, the first time a duo has lifted the prestigious award.

The pair won the £30,000 prize for their collection War Primer 2, based on poet and dramatist Bertolt Brecht's 1955 publication War Primer.

The annual prize, which began in 1996, is awarded to photographers of any nationality for their contribution to the medium either through exhibition or publication.

Brett Rogers, director of the Photographers' Gallery in London and chair of the award jury, called Broomberg and Chanarin's work "bold and powerful".

The jury, he said, "applauded the way in which the project pushed the boundaries of the medium, exploring the complex relationship between image and text".

The other shortlisted artists, who are each awarded £3,000, include British artists Mishka Henner for No Man's Land and Chris Killip for What Happened - Great Britain 1970-1990.

The exhibitions were seen last year at the Museum of Contemporary Art in Rome and Le Bal in Paris respectively.

Spanish-born Cristina De Middel was recognised for her self-published The Afronauts, a book of constructed photos about a cancelled Zambian space programme.

The photos will be on display at the Photographers' Gallery until 30 June.