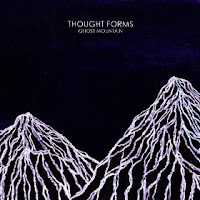 Thought Forms is the Wiltshire-based trio of Charlie Romijn (guitars/vocals), Deej Dhariwal (guitars/vocals) and Guy Metcalfe (drums) - and “Ghost Mountain” is their second LP, since forming almost a decade ago.

It’s clear that they draw inspiration from the indie and rock scenes on both sides of the Atlantic (Sonic Youth and My Bloody Valentine spring readily to mind) but their vision and passion leads them to wring out new sound from experimental and improvised excursions. Combined with a production that gives room for atmosphere and space means that they don’t slip into mere (quiet/loud, slow/fast) cliché or pastiche. They are, at times, loud and brutal but, as the album’s title suggests, there is a spectral quality; usually pertaining to the half-submerged vocals and their wont to shift pace continually.

Running through the tracks: “Landing” kicks off with a slow and powerful 2-chord psychedelic dirge. Shifting pace, the guitars of “Ghost Mountain You and Me” - strummed with the indie urgency of the Wedding Present – are glazed with a dreamy vocal, and “Sans Soleil” is resplendent with stateside Dinosaur Jr / post-Pixies raw melodies.

The centrepiece is the epic “Burn Me Clean” where an ecclesiastical chant for the dark sonic generation slowly pipes its way into jungle-fevered incantations and tormented hallucinations. “Only Hollow” was selected as lead single, most likely for its length and accessibility, and has received air play. “Afon” has a smoldering grace and “Song for Junko” is hued with post-punk and hints of Galaxie 500. Album closer, “O”, is a post-apocalyptical and desolate place.