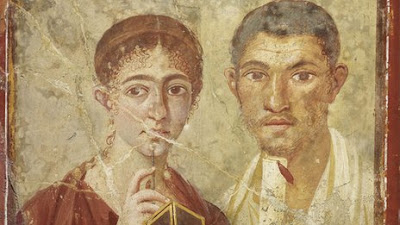 The British Museum has said 1,000 cinemas across the world will screen a recording of Pompeii Live, a tour of its exhibition of Roman life before a devastating volcanic eruption.

The museum said 70% of tickets have been sold for the live screening in the UK and Ireland on 18 June.
The event will be replayed in cinemas in 51 countries later in the year.

It features objects recovered from the ruins of Pompeii and Herculaneum, both wiped out by Mount Vesuvius in 79AD.

The exhibition, Life and Death in Pompeii and Herculaneum, closes on 29 September.

It received five-star reviews from critics in March - with the Daily Telegraph noting "the quality of much of what has come to London beggars belief".

The BBC's arts editor Will Gompertz said the exhibition offered "a snapshot of daily life 2,000 years ago".

The exhibition has proved a hit with patrons, with more than 260,500 tickets sold and the museum's opening hours extended to cope with demand.

Pompeii Live will be introduced by the British Museum's director, Neil MacGregor, and will be presented by Peter Snow and Bettany Hughes.

Countries that have signed up to the later showings include China, Colombia, India, Israel, Malta and Norway.

"This kind of innovative broadcasting - unthinkable even five years ago - has opened up new ways of sharing knowledge and accessing objects for adult and young audiences alike," said MacGregor.