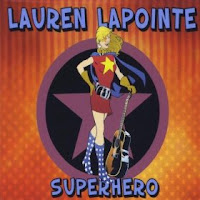 Lauren Lapointe is a Savannah, Georgia based singer-songwriter with roots in folk, acoustic and alternative country music – three genres, that when combined, usually get described as Americana. That sounds about right, though it’s worth mentioning that much of Lapointe’s oeuvre comes with a rootsy pop edge, which is always appealing, and would sound great on mainstream radio - in the way Laura Cantrell’s songs used to, and occasionally, Lucinda Williams’ still do.

Her 2007 album “Butterfly” got her foot in many industry doors, and “Superhero” should see Lapointe throwing them open. Produced in Nashville by Thomm Jutz (Nanci Griffith, Mary Gauthier, Steve Young), the sound is an engaging combination of classic country, narrative songwriting and plentiful hooks. Jutz weaves these threads with some skill, emphasizing Lapointe’s many strengths, and inspiring the musicians at his disposal to some fine performances.

Kicking off with “Silent Hurricane”, its torchy arrangement and conflicting meteorological imagery is clever and cool, and easy to like. “Silver Cowboy Boots” brings to mind both the fore mentioned Laura Cantrell and insurgent country legend Kelly Hogan. It comes with a beautifully languid pedal steel and the sort of storyline that country music built its reputation on, and unfortunately, is rarely heard these days. It might be the best thing here, though both “Dusty Tired Angel” and the rockabilly flecked “The Ghost of Elvis” run it close.
www.laurenl.com
www.facebook.com/LaurenLapointeMusic
www.laurenlapointe.bandcamp.com
Lauren Lapointe CD Baby Page
Phil S.