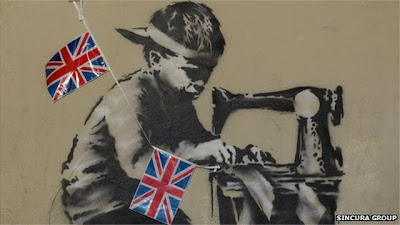 A Banksy artwork that went missing from a wall in north London is up for auction for a second time.

The mural Slave Labour was taken from Wood Green in February. It later appeared at a Miami auction, but was withdrawn after protests.

The graffiti art is now being offered for sale in London by the Sincura Group. The minimum bid is £900,000.

MP Lynne Featherstone has urged the owners of the mural to give it back to the residents of north London.

The mural, which depicts a boy hunched over a sewing machine making union jack bunting, appeared on the side of a Poundland store in May 2012, just before the Diamond Jubilee celebrations.

It was being auctioned at the London Film Museum in Covent Garden on Sunday evening.

Sincura said the mural had been "sensitively restored" and if the piece did not reach the reserve price it would be sold to a collector in the US.

Tony Baxter, director of the Sincura Group, said he could not divulge the owner of the piece but insisted it was being sold legally.

He said there was a chance the work would leave the UK unless an "angel" bought it and put it in a museum.

But Ms Featherstone, Liberal Democrat MP for Hornsey and Wood Green, said: "This is admirable, perhaps, but also incredibly optimistic.

"So now I make this direct plea to the owners of the Banksy piece: You have this one last chance to do the right thing.

"You have deprived a community of an asset that was given to us for free and greatly enhanced an area that needed it.

"I call on you, and your consciences, to pull the piece from both potential sales and return it to its rightful place."

When the Bristol artist's mural was up for auction in Miami, it was expected to fetch up to £450,000.

It was suspected the work had been stolen when it disappeared, but the Metropolitan Police said there were "no reports of any theft".

Six identical copies of the mural reportedly appeared in Wood Green on Saturday morning, 36 hours ahead of the auction.

According to The Sun, the replicas - painted on polystyrene - were left outside the same Poundland store where the original appeared.

The Metropolitan Police confirmed to the BBC that one of the replicas was later confiscated from a member of the public.

"At 10:40 hours on Saturday, 1 June, police stopped a man in possession of a piece of artwork in Wood Green," they said.

"The artwork is being treated as property found on the street and has been taken to a North London police station."

If no-one claims the copy, it, too, will be auctioned.