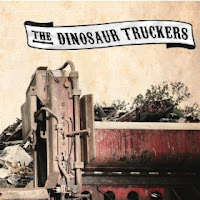 German quartet, The Dinosaur Truckers, play a form of country music that isn’t afraid to rock. Their energetic, rambunctious take on a genre known for its staid conservatism is to be welcomed with open arms, and should see the group embraced by fans of the Bloodshot label, the early country/rockabilly sides of Johnny Cash, Hank Williams (1 and 3) and Lemmy’s collection of cowboy hats. I’ve no idea if they’re hugely popular in their homeland, but I imagine if their live shows are as much fun as their new record, they can’t have too much trouble attracting an audience.

Their third album begins well; “Black Ship” probably owes a deal more to folk than to country, and rattles forth like The Men They Couldn’t Hang put through a faulty Spaghetti Western power mincer. It’s followed by “Let It Roll”, on which guitars shimmer like shafts of hazy light on a desert highway, and names like True West and Evan Johns are ushered forth from a particularly dry and gritty part of my dustbowl subconscious.

“Hey People” is a fantastic call to arms, propelled by feisty strings (banjo, guitar, mandolin), and a message well worth hearing, and they bring things to an excellent conclusion with “High, Low and Lonesome”; a dark tale that incorporates a little satanic Marty Robbins into the mix. I don’t get to type that too often!
www.dinosaurtruckers.de
www.facebook.com/dinosaurtruckers
www.reverbnation.com/thedinosaurtruckers
The Dinosaur Truckers CD Baby Page
Phil S.