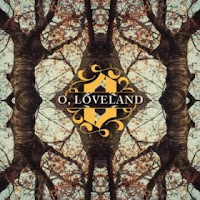 Together since 2011, Amy Boykin and Clark Jones - the duo who comprise O, Loveland - have been busy honing their songwriting and performance skills. Their debut self-titled EP features five songs which, in some ways, transport the listener back to simpler, less complicated times, and it’s hardly surprising that they’re being compared to The Civil Wars and the Avett Brothers. I can see the similarities, but for me O, Loveland seem far more contemporary in both their presentation and overall sound, although their rootsy material and country flecked songs hark back to the Virginia hills, there’s a knowing, alternative, indie edge to what they do that separates them from the pack.

The first of the five tracks is the splendid “Vineyard”. A frantically strummed guitar holds rhythm and melody together while both Boykin and Jones sing lead and in harmony. On “Black Crow” they slow things down, and their imagery brings to mind Joanna Newsom and Sharron Kraus; it’s followed by “Love Return”, which keeps things unhurried, though its themes are altogether different. “The Hunt” and “Give” finish things off – the latter has had a video produced for its promotion, which is almost as heartwarming as the song.
www.facebook.com/weareoloveland
O, Loveland CD Baby Page
Phil S.