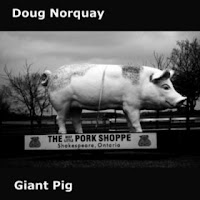 Doug Norquay is a Canadian country, folk-roots, bluesman with a sound that harks back to the mid-70s Los Angeles boho scene, but also something darker, desperate and more primal. He plays a mean slide guitar and sings with a voice that’ll remind discerning listeners of Howlin Wolf, Tom Waits, Johnny Dowd and Tom Ovans, and writes songs that rattle and shake, sooth and placate, or just plain terrify. This is his third proper album – I think - though there have been a few cassettes released over the years, but it’s the first of Norquay’s records I’ve got to hear. That will be remedied.

A stalwart of his local Ontario scene, the list of musicians he’s opened for or shared bills or stages with is a who’s who of acclaimed artists and performers, blues legends and troubadours, from B.B. King, Buddy Guy and John Hammond, to Ron Sexsmith, Robbie Robertson and Danny Gatton. He’s played bars, festivals, shopping malls and sidewalks, mostly solo, and has been recording on and off since the early ‘90s – it’s a wonder he doesn’t turn up occasionally on the UK roots circuit. I suspect he’d go down a storm.

He begins his latest offering with “Poor Lightnin”, its walking rhythm and Norquay’s semi-whispered vocal is instantly affecting, and that’s before the dark narrative takes hold. It’s followed by the epic, eight minute “Rude Scenes in the Honda Lot”, and it’s a slow burning thriller with some of the finest atmospheric and sparse solo guitar I’ve ever heard. The opening trio of songs is completed by “The Day That I Was Born”, a perfect combination of wordplay and chilling strings. Over the next ten tracks he consistently hits similar highs, and if I hear another folk-blues-Americana record that’s as good before the end of the year, I’ll be amazed.
Doug Norquay Website
www.facebook.com/Doug-Norquay
Doug Norquay CD Baby Page
Phil S.