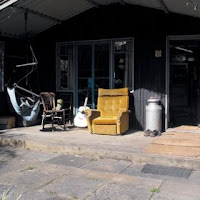 The sixth album from Pilote (aka producer Stuart Cullen) has been built for comfort rather than speed. Now residing in Somerset, Cullen has applied a leisurely, relaxed vibe to some of the most unobtrusive beats ever recorded. Various rootsy influences range from old country and bluegrass to folk, and although there’s no chance of mistaking “The Slowdown” for anything that two-steps out of Nashville or Bakersfield, its banjos and acoustic guitars speak volumes.

Pleasingly, choice cuts are plentiful. “DBS” is rustic and pastoral – the opening bars could be Traffic or The Eagles – before it gains angular structure, though nothing too oblique. “Shapeshifter Blues” is so good it gets away with a whistler, and “Lesson 51 (A Tailchaser’s Waltz)” is a spoken word piece that, inevitably, chases its own tail – there’s a clue there somewhere.

Concluding with the nine minute “Before You Fall Down”, its epic scale and aural relocation back into the city, perhaps rejects the rural ideal, but its stylistic nods to Kraftwerk and Klaus Schulz make for an interesting ride, all the same.
www.microspiral.com
Roman H.