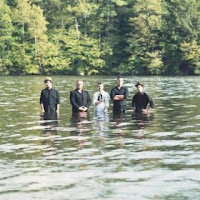 From Portland, Maine, The Ghost Of Paul Revere are one of the new breed of Americana groups who take their lead from the mountain folk, stringband, bluegrass and gospel traditions, rather than proto-grunge, ‘70s singer-songwriters and the Uncle Tupelo / Jayhawks line. There’re no shortage of artists already blazing this particular path, from the Old Crow Medicine Show and Civil Wars, to UK interlopers Mumford & Sons, but on the strength of their six-track debut EP “North”, The Ghost Of Paul Revere are a worthy addition to the genre.

They describe themselves as a “holler roots band”, which seems to suit them, and they play with a controlled passion that encompasses tight musicianship and three-part harmonies - and with a host of songwriters in their ranks, they’ve enough lyrical variety to keep things interesting.

So, their record; six tracks, which is just enough to make a proper acquaintance, but as with all EPs, there’s no room for filler. Fortunately they’re aware of the expectations and the group delivers a beautifully crafted collection, and with a running time of close to 30 minutes, nothing feels rushed, and the songs get plenty of time to bed in.

Beginning with “San Antone” – its slow build and relatively simple instrumentation leaves lots of space for the voices to soar, and it comes with a chorus that sets up home in the listener’s subconscious. Roots radio will surely love it. “Grandpa's Chair” is altogether gentler and quieter, but the group’s vocals still excel and the hooks are retained, and the ethereal “Kodiak” adds yet another dimension.
www.ghostofpaulrevere.com
www.facebook.com/ghostofpaulrevere
www.reverbnation.com/ghostofpaulrevere
The Ghost Of Paul Revere CD Baby Page
Tony S.