Review: deltaR – Check It Out Baby

deltaR – Check It Out Baby (Independent) 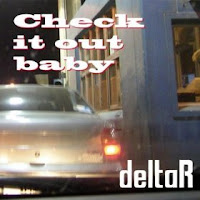 deltaR are a Swiss alt. blues trio, and the lower case / upper case configuration of their name is how it appears on their artwork – so I’m sticking with it. Their heroes are Johnson, Johnson and Johnson. Not the extended family of cotton bud manufacturers and baby botherers, but the bluesmen, Robert, Tommy and Blind Willie, for whom the term cotton bud probably meant something a little more back-breaking.

The trio of Nicolas Roggli (guitar and vocals), Gabriel Scotti (bass and keys) and Jean-Philippe Mercier (drums) probably haven’t picked too much cotton themselves, but as with thousands of white, European musicians before them, they make a fine job of tapping into ancient blues, and they don’t forget to bring a little of themselves and their own lives to their gritty barroom style.

Opening cut “Get a Life” showcases the trio’s way with a driving rhythm, while Roggli’s nonchalant vocal and ringing guitar take it to another level. A cover of Willie Dixon’s “Pretty Thing” is almost gentle by comparison, and as its name suggests, could’ve originated in 1965, and been discovered on a long out of print British nuggets collection – great stuff. “Sex, Booze and Dirty Blues” is as fine as its name, and its walking rhythm and Scotti’s masterful Wurlitzer Piano strokes add several new dimensions.