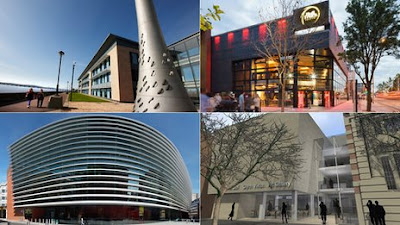 Dundee, Hull, Leicester and Swansea Bay have made the shortlist to become the UK's second City of Culture in 2017.

The four are hoping the title could bring major arts events, media attention and economic regeneration.
The contenders were chosen from 11 bidders.

Londonderry is currently the first UK City of Culture. The UK government created the title in an attempt to replicate the success of Liverpool as European Capital of Culture in 2008.

Being City of Culture has brought Derry events like the Turner Prize, an outdoor theatrical extravaganza written by Frank Cottrell-Boyce - who worked on the London 2012 Olympics Opening Ceremony - and BBC Radio 1's Big Weekend.

But organisers faced financial difficulties when income from sponsorship and ticket sales failed to live up to expectations. The City of Culture does not receive direct funding from the UK government.

The 2017 venue will be picked in November from the four contenders.