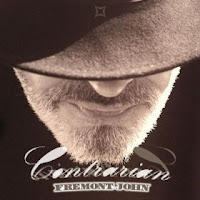 Fremont John earned his spurs touring the Midwest, singing and playing electric guitar / keyboards with his band InnerVision - supporting major artists like Rush and Styx, before a career in banking and then his own environmental business began to demand more of his time. However, the music bug isn’t so easy to kick, and in the early ‘90s he returned to the stage with InnerVision drummer Michael Carden, and together they formed Alias, a popular classic rock outfit that gigged extensively throughout the decade. Simultaneously, Fremont John began to perform solo, acoustic shows, which he enjoyed as much as his audiences, and in 1999 he sold his business, relocated to Key West, and decided to properly re-launch his music career.

There, he’s become something of an institution amongst local fans, with monthly tours and a succession of acclaimed records under his belt. An extremely gifted acoustic guitarist, he’s well known for re-inventing well-known and classic songs, and there are four of them on “Contrarian”. Indeed, his take on The Allman Brothers’ “Melissa” is revelatory, with his comfortable vocal combining with his guitar, and neither dominating the space. Equally, the Isley’s “Summer Breeze” is relieved of its languid electric solo and is replaced with something earthier and innate. It’s a great version.

Of course, there’s no shortage of original material to be found amongst the dozen tracks on “Contrarian”, and the fact that they happily co-exist alongside genre-defining songs is worth emphasizing. “Back in the Game” makes an impact straight away. It’s urgent and vital with a perfect riff and a chorus that sticks like musical glue. “My Momma, She Really Loved to Dance” is jazzy and lyrically reminds of the sort of thing Ray Davies might have come up with as a sequel to “Come Dancing”. The title track brings things to a conclusion with a statement of being, that might have been better placed at the beginning - which means I’d better play the whole thing again.
www.fremontjohn.com
www.reverbnation.com/fremontjohn
Fremont John CD Baby Page
Phil S.