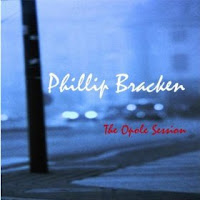 Australian singer-songwriter, Phillip Bracken’s debut album was recorded live in the studio under quite extraordinary circumstances. While in Poland – whether touring or just traveling, I’ve no idea – he met, by chance, four Polish musicians, who he spent two days with, rehearsing his songs, and recording the eight tracks on “The Opole Session”. For those for whom geography is not a strong subject, Opole is a city in southern Poland, situated on the Oder River.

Considering the unfamiliarity of the material to the majority of the musicians, and the live setting in which it’s presented, the results are incredibly cohesive, and not at all basic or lo-fi. Indeed, opening track “It's Not Too Late / Ishmael” is beautifully structured, building slowly and surely, with Bracken in fine voice, and “The Storm” impresses with its European gypsy jazz rhythms and the whole band providing energy and flow. “Les Moustiques” continues the trend, and it’s a wonderful track. It’s almost certainly Bracken’s finest moment here, and the musicians weave complex magic in support.