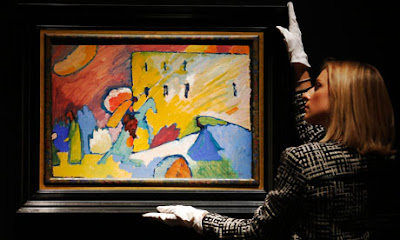 Police have arrested two suspects alleged to be leaders of a group of six artists.

A series of searches were carried out at art galleries, businesses and homes in six German cities, as well as Israel and Switzerland.

Since 2005 the ring is believed to have produced and sold more than 400 faked paintings.

They were passed off as "previously unknown" works by such Russian avant garde artists as Wassily Kandinsky, Kazimir Malevich, Natalia Goncharova and Mikhail Larionov.

The police say they were sold for sums ranging from thousands to hundreds of thousands of euros.

The arrested men, aged 41 and 67 respectively, are accused of selling forged artworks to customers in Germany and Spain for a total of more than £1.5m (1,7m euros) over the past two years.

The suspected counterfeiters are thought to be of Russian, Israeli and German-Tunisian nationality.

Two years ago an expert German forger and his wife were jailed for art forgery after they imitated the style of lesser-known painters.

A number of reputable dealers in the art world were fooled.