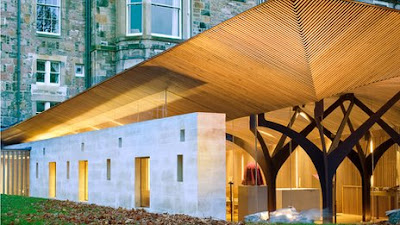 The Chapel of St Albert the Great is located in the garden
of a townhouse in George Square, Edinburgh

A garden chapel in Edinburgh, a rebuilt castle in Warwickshire and the Olympic masterplan have been named on a list of Britain's best new building projects.

They are among 43 buildings in the UK to receive awards for architectural excellence from the Royal Institute of British Architects (Riba).

They will now go forward, along with nine more buildings from the EU, for Riba's top award, the Stirling Prize.

This year's winner will be announced on 26 September in London.

The list includes schools, galleries and visitor centres at Stowe Gardens in Buckingham and the Giant's Causeway in Country Antrim, Northern Ireland.

A flagship Marks and Spencer store in Cheshire, described by the retailer as "the most carbon efficient, premier M&S store to date", is also included.

Swimming baths in Islington, a community nursery in Camden and a West End office building are among the 13 winners drawn from London.

A courthouse in Copenhagen, Denmark, and the Enzo Ferrari Museum in Modena, Italy, are among the nine award buildings from elsewhere in the European Union.

"Risk-taking is not for the faint-hearted in recessionary times," said Riba president Angela Brady.

"But amongst this year's crop of truly exceptional buildings I am delighted to see such a variety of projects doing just that.

"It is good to see that sustainability is at the heart of so many of these winners - most clearly perhaps where, encouragingly, a major client has championed it."

The Riba Awards have been running since 1966 and are judged and presented locally.

Last year's Stirling Prize was won by the Sainsbury Laboratory, an £82m plant research centre at the University of Cambridge.