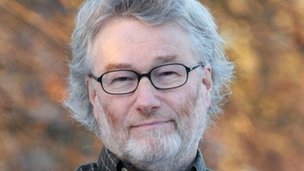 The final novel by Iain Banks has been published, 11 days after his death.

The Scottish author died on 9 June at the age of 59 after announcing in April that he been diagnosed with terminal gall bladder cancer.

His last novel, The Quarry, has already been one of the top 10 best-sellers on Amazon for two weeks as a result of pre-orders.

Meanwhile, organisers of the Edinburgh Book Festival have said this year's event will feature a tribute to Banks.

He had asked his publishers Little, Brown to bring forward the release date of The Quarry after telling fans about his illness.

The book details the physical and emotional strain of cancer and describes the final days of a man with terminal cancer, as seen through the eyes of his son.

Critics have described it as "sad" due to the subject matter and the fact it is Banks' last novel, but it has also been praised for being "written with the life-enhancing verve characteristic of his best work".

In an interview with the BBC, Banks said he was almost finished the novel when he was diagnosed with his own illness.

He said: "I had no inkling. So it wasn't as though this is a response to the disease or anything, the book had been kind of ready to go.

"And then 10,000 words from the end, as it turned out, I suddenly discovered that I had cancer."

After his death his publisher said Banks had been able to celebrate The Quarry when he received early copies.

"Just three weeks ago he was presented with finished copies of his last novel, The Quarry, and enjoyed celebration parties with old friends and fans across the publishing world," Little, Brown said.

"Iain Banks' ability to combine the most fertile of imaginations with his own highly distinctive brand of gothic humour made him unique. He is an irreplaceable part of the literary world."

The Edinburgh International Book Festival said its closing Sunday would feature an event in which crime novelist Ian Rankin and two more of Banks' close friends, Val McDermid and Ken MacLeod, would discuss the author's work.

The festival, which celebrates its 30th anniversary this year, will feature 700 events between 10 and 26 August.

Those appearing will include authors from each edition of the Granta Best of Young British Novelists List, which is compiled every 10 years.

Salman Rushdie, who was featured on the 1983 list, will look back on his career, while Evie Wyld will discuss her inclusion on the 2013 list.

Margaret Atwood, Gavin Esler, Kate Mosse and Neil Gaiman have been invited to select and chair a series of events on genre, the collapse of trust, women in the 21st Century and the reshaping of modern fantasy respectively.

Major strands of the festival will focus on graphic novels and children's literature.

Festival director Nick Barley said: "This is not just a birthday, but a celebration of an extraordinary generation of talent. The explosion of Scottish culture over the last 30 years has reverberated around the world and our writers, artists and performers have influenced all aspects of our lives.

"While we have prematurely lost one of our greatest authors just last week, we must also celebrate the next generation of writers who are distilling the world around us."

Banks published his first novel The Wasp Factory in 1984 and his debut sci-fi title, Consider Phlebas, came three years later. His novel The Crow Road was adapted for a popular television series in 1996.

In 2008 Banks was named one of the 50 greatest British writers since 1945 in a list compiled by The Times.