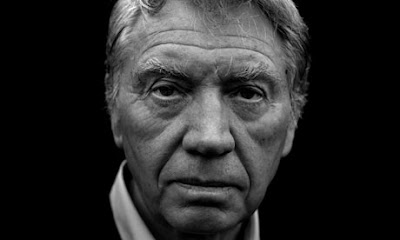 The 77-year-old spent a week in Aleppo, where he came under sniper fire as he tried to take pictures of the conflict.

McCullin told BBC Radio 4's Front Row he "hadn't seen any real evidence of what's been going on" in Syria, so he decided to take one final assignment.

His aim, he added, was to show the human toll of the fighting.

The photos, published in The Times newspaper on Thursday, focus on families displaced by what he described as "constant heavy shelling".

One picture, replicated at the top of this page, depicts a group of children hunting for water supplies on the streets of the war-ravaged city.

"We don't need any more scenes of snipers and rebels firing over brick walls," he told the BBC. "What we really need is the human interest side of this story."

"The children play on the streets here as if it's Guy Fawkes night, with all these explosions going on around them.

"The great tragedy is that, if only the people in Russia knew that their taxes were going on making these dreadful weapons that were killing innocent people here, they might think twice about their leadership."

McCullin has braved war zones in Vietnam, Lebanon and Cyprus during his long and industrious career, spending more than 18 of his 50 years as a photographer on the front line.

He was wounded by fragments from a mortar shell in Cambodia, temporarily blinded by CS gas during a riot in Derry, and arrested by Idi Amin's henchmen in Uganda.

After coming back from Iraq in 2003, he announced his intention to retire from war photography and settle down in Somerset.

It was there he made the decision to go Syria after following the conflict in the papers "week in, week out".

"I wake up every morning to the most beautiful dawns," he said. "But suddenly it dawned on me, are you living the real life that you were cut out to live? Of course, my age doesn't permit me to behave the way I did in my youth, but I'm curious about the world."

He described the situation in Aleppo as "ghastly", with people arriving at hospitals "cut completely in half" and "families being killed in their own homes".

On more than one occasion, he was personally in the line of fire.

"And you have to bear in mind that at my age I can't run any more. At 77, and wearing body armour, I'm like a tortoise. I'm a really good target."

However, he downplayed his own role in reporting the conflict, saying, "I'm just a carrier pigeon that brings the message back home."

His strongest impression was of the lack of Western aid making its way across the border.

"The road back from Aleppo was completely empty of any aid trucks that should be making their way into the city," he said.

"That's the annoying thing. We've pledged all kinds of support, but there's nothing tangible coming into Syria in terms of aid and medical supplies."

Don McCullin was speaking to BBC Radio 4's Front Row. You can see his photographs from Aleppo on the Times website (subscription required).