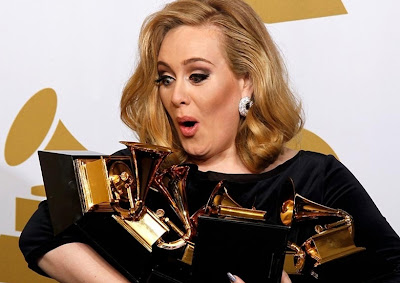 Adele has been named Billboard's top artist of 2012, while her hit record 21 was named top album of the year in the music magazine's annual review.

The 24-year-old is the first to receive both accolades two years in a row.

Former X Factor contestants One Direction rounded off a successful year of US invasion after being named top new artist and Maroon 5 were top group.

The honours for Adele come in a year which saw her win six Grammy awards and dominate the US charts.

Her second album 21 went straight to number one when it was released in March 2011 and did not leave the top 10 until the beginning of September this year. During that time, it spent 24 weeks at the top spot.

The year's top three songs were Gotye's Somebody That I Used to Know, Carly Rae Jepsen's Call Me Maybe and Fun's We Are Young, respectively.

British acts in the top 10 - Ellie Goulding's Lights was at five, with Glad You Came by The Wanted at six and One Direction's What Makes You Beautiful at 10.

Other British successes included Mumford and Sons who topped the rock, alternative and folk album artist categories, as well as scoring the honour in each of the genres for their album Babel.

The magazine's review is based on chart performance, as well as streaming and social data.