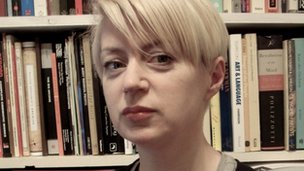 Video artist Elizabeth Price has won the Turner Prize, one of the art world's most prestigious and controversial awards.

The actor Jude law presented Price with the award at Tate Britain in London.

The prestigious prize is awarded to a British artist under the age of 50 who is judged to have put on the best exhibition of the last 12 months.

Price is the least well known of the four artists and admitted she was "surprised" to win.

During her acceptance speech she praised her comprehensive school education, saying her career would be "unimaginable" without public support for the arts.

Thanking the Tate, she also commended the other shortlisted artists for their "respect, camaraderie and a sense of the absurd".

According to the Baltic Gallery in Gateshead, where Price exhibited earlier this year, she "draws upon historical film, photographic archives and collections of artefacts to generate fantasy episodes".

At the exhibition of the nominees' works at Tate Britain, Price combined old music, photographs, video footage and text to depict a tragic fire at a branch of Woolworth's in Manchester in 1979, in which 10 people died.

"When I started making the work, I didn't know it would end up being about that subject. I believe art should be dealing with these subjects and I think art is a way to remember them," said Price.

The judges said they admired the "seductive and immersive" aspects of her 20-minute film, which they said "reflects the ambition that has characterised her work in recent years".

Her use of various archival material created a "rhythmic and ritualistic experience", they said.

Born in Bradford in 1966, Price received a Bachelors degree in Fine Art from Oxford University before attending the Royal College of Art where she obtained an MA in Fine Art in 1991.

She also has a PhD in Fine Art from the University of Leeds.

The annual ceremony and exhibition of the nominees' work returned to Tate Britain this year having taken place at the Baltic Gallery in 2011 - the first time the ceremony was held outside a Tate venue.

In the future, the prize will be held in a different city around the UK every second year, returning to London each year in between. It will be held in Londonderry in 2013.