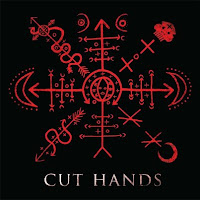 The title of Cut Hands’ (aka William Bennett) first LP, “Afro Noise” clearly laid bare his intention: to merge tribal rhythms with dissonance, and he’s been gaining mounting attention, for both his recorded work and visually unnerving live performances. Black Mamba is the compelling follow up and he again arms himself with a melee of exotic percussion (including djembe, doundoun, ksing-ksing, rin and manjira), acoustic drums and synths to unleash a techno tribalist swarm, which is less violent and brutal than his former outing, and for fans of Bennett’s former noise act, Whitehouse, it may be considered quite lenient a prospect.

Across its dozen tracks, elements of sci-fi (“Witness the Spread Of the Dream”) dissipate into hypnotic and hammered Eastern rites (“Black Mamba”), cinematic jungle river trips (“Krokodilo”) segue into metallic atmospherics (“Nzambi Ia Ngonde” and “Nzambi Ia Muini”), and wooden polyrhythms (“Brown-Brown”) meet glossy ecstatic swathes (“54 Needles”). Occasional forays into noise - such as the latter half of “No Spare No Soul” -seem justified but are still underpinned by ceremony.
www.susanlawly.com
Willsk