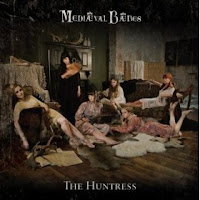 A double album is a significant undertaking by even the most established of bands; for the Mediaeval Baebes to have stretched themselves to 17 songs across two discs on this, their seventh studio release, stands as a bold assertion that they have found their ground and are standing proud on it.

Given their recognised affiliation with the music of olde England it’s surprising to find that all bar two tracks are self-penned. The six piece are predictably in fine voice throughout, both individually and as an ensemble; but although there are nods towards sixteenth century choral, and early English and Latin verses make an appearance, it’s really a kind of ambient folk that dominates the record. There are few concessions to scholarly period authenticity and the gentle combination of styles married with a crystal clear production adds up to a surprisingly modern ‘new age’ sound.

That said, the high points come with the more traditional ‘Veni Veni Bella’, ‘Dianae’ and ‘Dies Irae’, (the latter pair being based lyrically on ‘Benidiktbeuern’, the original medieval text which inspired Orff’s ‘Carmina Burana’); while familiar folk ballads ‘Cruel Sister’ and ‘She Moves Through the Fayre’ fit less well. It may pay them not to stray too far from the original path.

Presented live within the imposing cream limestone walls of Norwich’s twelfth century cathedral, under the gaze of its thousand or more ornate ceiling bosses, the Baebes are an altogether feistier proposition. With an injection of visceral energy to match their unquestioned vocal prowess the set takes on a (perhaps not entirely appropriate) pagan air; and courtesy of dances, hand-claps, sticks and wild instrumentation the tranquillity of their recorded sound becomes more Celtic, moving ever closer to the bucolic menace of The Wicker Man.

They’re rapturously received even though it isn’t a perfect performance. First night nerves make the opening half a tentative affair, spoken word introductions being a particular casualty; but post-interval and with a collective costume change from virginal white to sombre black they are cohesive and focussed, and work their already committed audience with consummate skill. The Dean and Chapter will have been gratified that the encore embraced religious themes, although this close to Christmas a carol or two might not have gone amiss either.
www.mediaevalbaebes.com
Neil B.