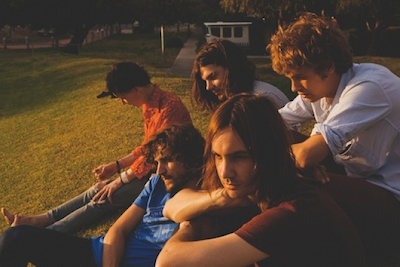 With their celebrated second album Lonerism  featuring highly in all the Albums of the Year lists, TAME IMPALA have just announced a headline show at Hammersmith Apollo for June 2013. Date/info below:

Tickets go on-sale at 9am on Friday morning.

As for those end of year lists: 'Lonerism' is the Number 1 album in NME, Loud & Quiet and Filter, Number 6 in the Guardian, 10 in the Sunday Times and the Fly, 11 in Uncut, 12 in MOJO, 13 in Clash, and the guys have just been named as Artrocker's International Band of the Year… Truly, Tame Impala are the band that have united the critics!

In other news the official video for 'Feels Like We Only Go Backwards' has now clocked over 550,000 hits on youtube just a fortnight after being posted. Createdby animators Joe Pelling & Becky Sloan, it’s a hypercolour wave, a visual imprint of their sonic landscape, and totally Tame Impala. Click HERE to watch.

Critical acclaim for Lonerism, out now on Modular Recordings:

“Lonerism displays an innate understanding of psychedelia, not least in its balance between the beatific and the bleak. This is underpinned by genuinely great songwriting and an innate pop sensibility.”
The Guardian - 5 Stars *****

“Tame Impala are the sound of brave new worlds and sunlit uplands. The second album from the Perth band combines psychedelic pop and lush electronica more beautifully than anyone.”
The Independent on Sunday – 4.5/5 (CD of the Week)

“Lonerism it might be, but on this form Tame Impala are about to make a whole lot of newfriends.”
MOJO - 4 Stars ****

“A kaleidoscopic paint bomb of melody, texture and repetition. Guitar pop doesn’t get much better.”
The Fly - 4 Stars ****

“The nine tracks meld luxuriously into each other, providing one mind-consuming blur of spaced-out synths, driving drum loops and dazed, dreamy vocals.”
The Sun – 4 Stars ****

“Be ready for glowing harmonies and distant excursions into a world of acid-fuelled indulgence. Give it time, and it’ll release itself.”
Live - 4 Stars ****

“A masterclass. Beneath all the dazzling soundscapes songwriter Kevin Parker never forgets the power of a strong tune”
The Observer

“Just about the most psychedelic sound around.”
Sunday Times