Review: Mike Wheeler - Self Made Man

Mike Wheeler - Self Made Man (Delmark) 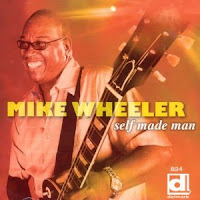 Like many artists presented by the ever-reliable Delmark imprint, Mike Wheeler is no new-comer, his thirty-year history on Chicago’s blues scene having taken in stints with local luminaries Cadillac Dave & the Red Hots, Big Ray & Chicago’s Most Wanted, and more besides. So whilst he may be billed as one of the hottest new names around, his capabilities have been finely honed in the white hot environment of the city’s club circuit for half a performing lifetime, and appear fully-formed on this, his first release proper.

Surrounded by stellar side-men, including his one-time band leader and blue-chip keyboardist Big James, and hotly-tipped harp player Omar Coleman, there’s an air of confident professional maturity that ignites these thirteen songs, twelve of them new and written by the band. It’s Wheeler himself that steals the show though. He’s in possession of a classic soul voice that would be the envy of many, and his fluid enterprising guitar playing shows why his solo career may have been arrested by sheer weight of offers to help out elsewhere.

The overall effect, probably best evidenced by the mid-point trilogy of ‘You’re Doing Wrong’, ‘Walkin’ Out The Door’ and ‘Get Your Mind Right’ , will appeal greatly to those Robert Cray fans who would see him rough off the edges and toughen up his playing; in other words: play the blues. ‘Moving Forward’ on the other hand is a stunning showstopper which recalls no-one else and identifies Wheeler the guitar man particularly as having the potential to be a uniquely creative talent on his own terms.
www.delmark.com
www.mikewheelerband.com
Neil B.