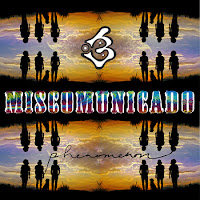 Describing themselves as a three-piece psychedelic electronic rock band, Dan Scott, Luke Barone and James Hodgkins (aka Miscomunicado) pretty much write their own review, though, as with all these things, the devil’s in the detail. In the two or three years they’ve been together, they’ve released a steady flow of material, and “Phenomenon” is their third long player. It may well be their best. They’re maturing as writers and musicians, and this brand new album is beautifully structured, and takes the listener on a psychedelic journey through numerous strange domains.

Indeed, various atmospheres and environments are evoked, from the darkness of space – both outer and inner – to deep seas and sub terra landscapes. They begin with “Modified Loose Cones”, and they merge the classic space rock of Hawkwind with the early electronic proto-punk of Sheffield pioneers Cabaret Voltaire. It’s wrenched into the 21st century simply through the availability of contemporary influences and production, but its exploratory heart is rooted in the ‘70s alternative scene. It’s trailed by “Be Here Now”; a chill out instrumental piece, with nice wah wah guitar and a modern beat, whilst “Fortune Teller” is a prime example of modern jam band adventure. Miscomunicado impress a little more with every new release. I’m already looking forward to album number four.
www.facebook.com/miscomunicado
www.miscomunicado.bandcamp.com
Rob F.
Posted by Bangs at 12/21/2012 09:05:00 am