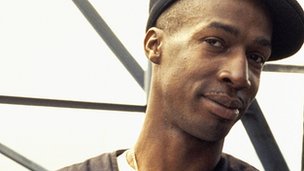 Grandmaster Flash and the Furious Five's 1982 hit The Message has been named the greatest hip-hop song of all time by Rolling Stone magazine.

The track tops a list of 50 influential hip-hop songs - the first the magazine has carried out for the genre.

Rolling Stone said the song was the first "to tell, with hip-hop's rhythmic and vocal force, the truth about modern inner-city life in America".

It is based around the refrain: "Don't push me, 'cause I'm close to the edge".

Over seven minutes, rapper Melle Mel painted a bleak picture ghetto life, while repeating the phrase "It's like a jungle sometimes, makes me wonder how I keep from goin' under".

It was one of the first records to fuse rap with a political message, and reached number eight in the UK charts.

However, Melle Mel has admitted the band were initially reluctant to record the song, after being presented the song by their label, Sugar Hill.

"We were used to doing party raps and boasting about how good we were," he told NPR in 1992.

Eventually, the rapper "caved in" but said he never expected the song to be "pivotal" in the nascent rap movement.

Grandmaster Flash and The Furious Five, who formed in 1978, continued their social commentary on the anti-drug anthem White Lines (Don't Do It), but eventually split up in 1983.

After a tried and failed reunion in 1987, they reunited once more in 2007 when they became the first rap group to be inducted into the Rock and Roll Hall of Fame.

The Rolling Stone list was compiled by a panel of magazine editors and and hip-hop experts.

"It's a list that would have been a lot harder to do 10 or 15 years ago because hip-hop is so young," Nathan Brackett, deputy managing editor of Rolling Stone, told Reuters.

"We've reached the point now where hip-hop acts are getting into the [Rock and Roll] Hall Of Fame... it just felt like the right time to give this the real Rolling Stone treatment."