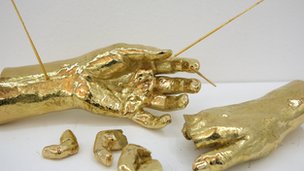 Turner prize-winning artist Douglas Gordon has hit out at Christie's after a solid gold sculpture was stolen from the auctioneer's London warehouse.

"It looks like I am the last person to know," Gordon told the Guardian, having learnt of the theft two weeks after it was reported to police on 12 November.

The artist believes his artwork, which has an insurance value of £500,000, has been melted down for scrap.

Christies said the incident, was "under investigation".

"We are in contact with all parties involved," a Christie's spokesman said. "We cannot comment any further."

The 2007 sculpture, entitled The Left Hand and the Right Hand Have Abandoned One Another, is normally on display at the Paris gallery Yvon Lambert, but was shown this summer at an exhibition organised by Christie's at Waddesdon Manor in Buckinghamshire.

Following the exhibition's conclusion at the end of last month, the artwork - which is available for private sale - was being held at Christie's Westminster storage facility, before travelling to Tel Aviv for a further exhibition in January.

"Apparently an employee randomly picked up the box it was in... and discovered it was a bit light," Gordon told the Guardian on Thursday.

The Scottish artist, who lives and works in Berlin, told the Guardian on Thursday that he had a call from the Waddesdon exhibition curator last week regarding the theft, "but I only heard from Christie's directly this morning".

"Apart from the fact it's outrageous that something might get stolen from Christie's, I still own the work and I am creator of the work," he said.

"There's something going on here about value and the way the artist is treated in all of this."

Gordon, who won the Turner Prize in 1996, is arguably best known for his video installations including 24-Psycho, a slow-motion view of Hitchcock's famous film, and Zidane - a video 'portrait' of the French footballer Zinedine Zidane.

Earlier this year, he became the first visual artist to be nominated for a prize at the Royal Philharmonic Society Music Awards for his film installation K364.

Since the start of the global economic crisis in 2008, gold has risen in price by 100%, making it a popular target for thieves.

The sculpture is estimated to have a scrap value of approximately £250,000.