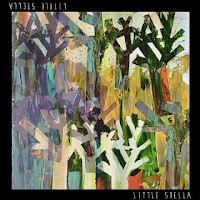 Ottawa based Little Stella is Ryan, Zach, Jeff and James and they list their influences as the Jonas Brothers and Slayer. A lesser reviewer might have run away and hid, but fortunately I saw straight through their cunning ruse and went directly to the ‘play’ button. Their second (self-titled) EP (five tracks / 16 minutes) places them securely in the same firmament as Fleet Foxes, Mumfords and many others in the new alt-folk movement. Obviously they’re operating in a popular genre, but the group appreciate to stand out they’ve to be leaders rather than followers, and they do everything they can to carve their own quite separate niche. This they do through strong, distinctive songwriting, and there are a number of occasions on the EP where they sound more than capable of succeeding.

First of all “Woods” provides an inspired launch. Guitars and vocals combine beautifully and the song’s structure and arrangement is fully realized. It’s followed by “Bluff”, a pristine three-minute folk-pop song; the sort of thing that should be blasting out of a radio five times a day. “Cold War” burrows in just as deep and “Highwire” indicates a willingness to rock. All in all, a filler-free EP - try and hear it if you can.
www.facebook.com/littlestellaband
www.littlestella.bandcamp.com
Tony S.