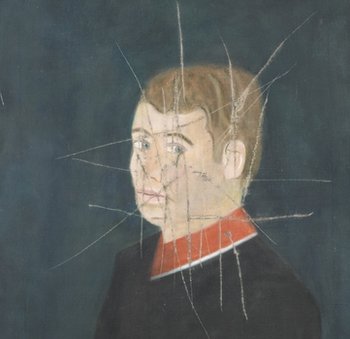 A self-portrait by the late Craigie Aitchison, who defaced it after an onlooker called it "flattering", has been bought by the National Portrait Gallery in London.

Aitchison, who was averse to self-promotion, insisted it could only be restored if the cuts remained visible.

It will go on display at the National Portrait Gallery in London on Tuesday.

"Craigie Aitchison was a highly distinctive artist whose singular vision was rooted in an acute sensitivity to colour and subtle implications of meaning," said Paul Moorhouse, curator of twentieth century portraits.

"We are delighted that this fascinating self-portrait survived the artist's momentary destructive doubts and can now be seen by future generations."

Born in Kincardine-on-Forth in 1926, Aitchison studied in Italy and was heavily influenced by early Renaissance painters.

Major retrospectives of his work have been held at the Serpentine Gallery, the Royal Academy in London and the Gallery of Modern Art in Glasgow.

An artist and printmaker, he was respected as a painter of visionary, religious and portrait subjects, which helped bring him a considerable following.

The National Gallery has portraits of Aitchison in its photographs collection, but this is the first painted portrait of the artist it has acquired.