Review: Apple Of My Eye – Devils 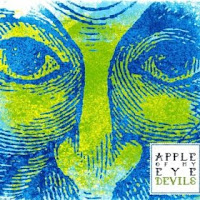 Apple Of My Eye’s debut “Devils” arrives housed in a fetching digipak cover, of which the group is rightly proud, and I would think they’re just as pleased with its contents. The London seven-piece has an approach to English folk music that’s hardly unique, but it’s exhilarating, nonetheless. For all their instrumentation, they keep their music reasonably frugal, relying instead on the interplay between vocalists Arran Glass and Ellie Rusbridge. And of course, the original songs provide the central core around which everything else revolves.

Likenesses are tricky, though Rusbridge occasionally has a hint of Joanna Newsom to her delivery, but it’s to ‘70s folk rockers such as Mr. Fox that comparisons seem the most appropriate, though it’s purely abstract.

“Jenny” sounds like it was written a couple hundred years ago, it’s the sort of shadowy folk epic – though less than three minutes long - where we’re on tenterhooks waiting for the ravishing and murder to start. The title track is steeped in biblical imagery and the group’s playing is dark and moody, and reflects the lyrical depths. They end with the positively upbeat “Fiddle Song”, that is until you really listen to the words, though after its predecessor “Sad Trevor Weeps” little excuse is required for a knees up.
www.facebook.com/applesinlondon
www.appleofmyeye.bandcamp.com
Tony S.