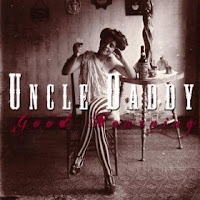 The five members of Uncle Daddy, TJ Stafford (lead vocals and guitars), Andrew Jed (mandolin, banjo and dobro), Robbie Anderson (violin), Jacob Szekely (cello) and Christopher Allis (drums), originated from all over the USA, but are have now settled in Los Angeles where they’re beginning to make a name for themselves, regularly selling out venues like The Troubadour and The Roxy.

It’s no surprise they’re such a popular live band. Though basically acoustic, they make a big, full sound, underpinned by their songs and Stafford’s no-holds-barred, full-on vocals. It’s something of a cliché that great live bands can struggle to recreate the excitement generated in a concert setting on record, but it doesn’t seem to have been a problem on “Good Mourning”. The playing is fluid and engaging, and all five musicians sync from the off.

They begin with a cluster of high-energy songs that showcase all their good points. The interplay between fiddle and other strings on “Shoulda Known Better” is incredibly feisty and when they apply the brakes on “Beautiful”, wispy, gossamer light guitar flecks offset a sweet lyric - undoubtedly the girls will understand. “Crossroads” bridges the gap, and as its title suggests, adds an element of blues menace.
www.facebook.com/gouncledaddy
www.soundcloud.com/thisisuncledaddy
Simon M.