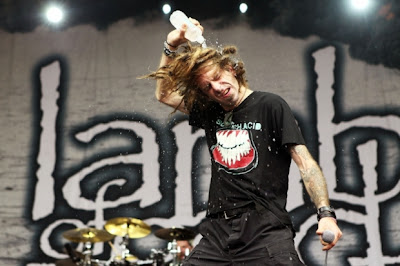 Randy Blythe, the frontman of US metal band Lamb of God, has been charged over the death of a fan at a concert in Prague in 2010.

The singer is accused of pushing the fan off stage during the show in the Czech Republic. The fan hit his head when he fell to the concrete floor and died of his injuries 14 days later.

Blythe was charged with causing bodily harm resulting in death on Friday.

Lamb of God's manager said Blythe will "fight vigorously" against the charges.

The court in Prague has three months to set a trial date or return the case to prosecutors for further investigation.

The 41-year-old singer faces five to 10 years in prison if convicted.

Blythe has previously said that he intends to go to Prague to defend himself at a trial.

In the statement reported by metal website The PRP, the band's manager Larry Mazer said: "While it is a tragedy that a Lamb of God fan died following a performance by the group, in no way do I feel that Randy did anything improper that led to the young man's injuries and subsequent death."

He continued: "The price of a ticket to a show does not entitle audience members access to a band's stage."

"We have testimony from the venue operator that acknowledges lax security and an improper barricade being used that evening," he added.

Following the incident, Blythe spent five weeks in the custody of Czech authorities before being released on bail in August. He has been in the US since then.

He was arrested when the band flew into Prague to play a gig, apparently unaware that there was an outstanding warrant for the singer's arrest.

Virginia-based Lamb of God, who received Grammy nominations in 2007 and 2011, played at the Download festival at Donington Park in the UK in June.