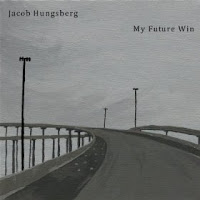 An early infatuation with The Beatles’ “Rubber Soul” album led 16 year old Jacob Hungsberg to begin writing and recording his own songs. His chosen genre back then was a hybrid of folk-rock and indie, and today he’s still ploughing much the same furrow. Though, having lived with “My Future Win” for a week or so, it’s Hungsberg’s keen pop ear that impresses the most. The five songs on his new EP burrow deep in the subconscious, and that’s primarily down to his rhythmic melodies and the hooks he hangs from them.

Everything here was written, recorded, produced and mixed by Hungsberg, and he’s done a remarkably good editing job, too. It’s an underrated skill, but when you’re a one-man recording operation, it’s essential to be able to distinguish the wheat from the chaff. There’s no weakness or excess on “My Future Win”, nothing to break the flow and absolutely no filler.

Opening cut “Plan Your Attack” bounces out of the trap, its addictive pop groove, powered by keyboards and string effects, is utterly compulsive. Better still is “Never Have It Again”; its toothsome arrangement underpins ambitious instrumentation and a song that deserves much attention. Of the five tracks, my favourite is probably “Pilots in Flight”. A ringing guitar line brings to mind Ezra Koenig’s looping six-string lead in Vampire Weekend, but it’s nothing overt or derivative, and Hungsberg nails it with a hazy vocal.

My only real complaint is a couple of the songs could have been longer, though the old adage about leaving them wanting more is always worthy of consideration.
www.jacobhungsberg.com
www.facebook.com/jakehungsberg
www.soundcloud.com/jacobhungsberg
Simon M.