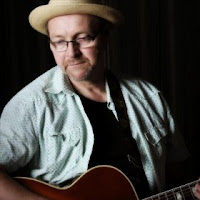 John Phillips is an Australian singer-songwriter, who’s been at the centre of that country’s indie scene for longer, probably, than he cares to remember. His long and extensive list of bands includes The Cigarettes, Raw Deal, Goanna and Kikx, and he fronted The Pipelines and Urban Principle. Over the years he’s shared stages with most of the iconic names of Australian rock, punk and new wave, including INXS, AC/DC, Midnight Oil, Radio Birdman and The Birthday Party. Now long settled into a solo career, he plays the occasional gig, records and releases records intermittently, and likes nothing more than playing music with old bandmates and new friends, of which, I imagine, he has many.

“New Frontier” is a re-issue, brought about by a trip to the outback, and an urge to complete a video that had sat on the backburner for far too long. It’s a cracking acoustic guitar-pop song; full of hooks and an upbeat, gregarious melody carries the lyric with some charm. The sentiments of the song refer to renewal and regeneration, and it’s likely to leave a smile on the face of whoever gets the opportunity to hear it. File it alongside your Michael Carpenter and Dom Mariani records and when you give it a spin, leave plenty of room for moving about.
www.johnphillips.com.au
John Phillips - New Frontier Video
Simon M.