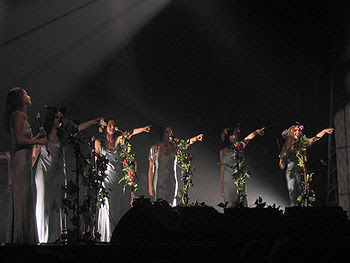 On 5 November 2012 Mediaeval Babes released their new album. The album will be supported by the following UK dates.

It’s fifteen years since the Mediaeval Baebes first appeared, adding a layer of knowing glamour to the sometimes fusty world of early music, shamelessly trading in baebe power to the delight of a public that lapped it up even as some of the purists sniffed. In the intervening period, Baebes have come and gone (and even been born), and what was once an imaginatively presented niche act is no longer an outlier. In Britain and beyond young musicians have reconnected with a folk tradition of strangeness and storytelling and the power of their unadorned vocals sounds more contemporary than ever. No wonder The Huntress, their seventh studio album, contains a version of ‘Cruel Sister’, the old murder ballad that was the title track of both Pentangle’s 1970 album and the Unthanks’ 2005 debut.

Katharine Blake, musical director and leader and now the sole original Baebe, is delighted with the results. “It’s been more satisfying, more realised and closer to what I hear in my head.” Although she describes producing, writing, performing editing and mixing as “a recipe for insanity”, The Huntress was worth the struggle. Loosely themed around the idea of ‘feminine energy’, the adapted sources which Blake has arranged for female voices range from Byron’s ‘She Walks In Beauty’ and Ben Johnson’s ‘Queen and Huntress’ to the mediaeval Arabic poetry of ‘Clasp of A Lion’ and old Latin of ‘Dianae’ (‘Of Diana’ the huntress, and appropriately pronounced DNA). ‘Jennet’s Song’ uses a transcript of the famous Pendle witch trial as a lyric, while less tragically ‘Care Away’ tells of a henpecked husband (and features The Mediaeval Bloakes, an impromptu choir of musicians and friends). References to the moon abound, unsurprisingly.

Blake considers the two discs that make up the album to split between folk and classical, the first record perhaps more accessible, the second part more esoteric. And with familiar songs like ‘Cruel Sister’ and a take on standard ‘She Moved through The Fayre’ as well as the instantly familiar ‘Lenten Is Come’ and newly penned, notably percussive ‘Cathedral of Song’ she has a point.

Yet the divide is not always obvious. ‘Veni Veni Bella’, already accompanied by a video
http://www.youtube.com/watch?v=t0v7nv2s3tQ is perfectly appealing, despite the archaic Latin lyric. The ‘Moorish jazz’ of ‘Clasp Of A Lion’ is eerily exotic (‘panting gazelle in the clasp of a lion’, indeed), while its sister piece, the knowingly spooky ‘Phantom’, where Esther Dee’s high vocal terrifies while an ancient groove is laid down beneath, genuinely defies time and genre. Concluding with an arrangement of ‘Dies Irae’, the Catholic doomsday hymn, it’s hardly lightweight stuff.

“It’s a choir. And it’s a band,” says Blake, neatly summing up the Baebes unique dichotomy. And it’s not like anything else. Asked if she can hear anything of her music in any contemporaries, Blake might compare a particular song or effect to Philadelphia’s Espers, Steve Reich’s systems music or even the other KB, Kate Bush. But The Huntress is truly sui generis.