Rare version of Beatles album fails to sell in Worthing 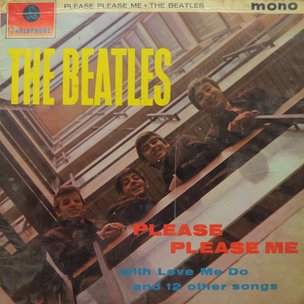 A rare copy of a Beatles album featuring the Fab Four's autographs has failed to sell at auction in Sussex.

Chris Collins says a gold-label version of the band's 1963 debut album Please Please Me, left to him and his sister, will now go "back in the sock drawer".

The LP was used as a drinks coaster during a boozy card game with fellow 1960s stars Freddie and the Dreamers, who also signed the iconic album cover.

But it failed to reach its auction price at Worthing auctioneer Campbells.

Mr Collins, from Hove, and his sister, Liz Chambers, from Worthing, were bequeathed the ground-breaking album by their late father, Arthur, who ran the Normandie Hotel in London, where the two bands were staying.

He said: "Late one evening while my father was drinking and playing cards with Freddie and the Dreamers, the Beatles returned to the hotel after attending some promotional events.

"All of the Beatles joined the card game and the record was placed in the middle of the table, where it was used as a coaster for whisky glasses."

The auction house had told the siblings that the gold-label pressing - a limited edition - could fetch about £15,000.

But bidding stopped at £12,000 and the item was withdrawn.

Now the pair will wait to see whether there is any interest in the next few days before considering their next move.

Mr Collins added: "I used to play it until about 10 years ago. Then when I found out it might be worth quite a lot, it became quite a burden.

"It had been sitting in a drawer with my socks, but once we were told about the value, I wouldn't play it any more and didn't know where to keep it.

"Now it may have to go back in the sock drawer."

A spokeswoman for Campbells said: "It is a real shame because it had attracted a lot of interest. But that is the nature of auctions. You never know."