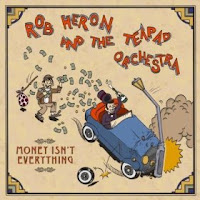 Got an urge for some tasty old time Americana music? Then you’d better get on a train and head for Newcastle, because that’s where you’ll find Rob Heron And The Tea Pad Orchestra.

Their take on pre-war country, blues and jazz is rather good, all things considered, and they’re making quite a name for themselves on the roots circuit. Indeed, you probably won’t have to travel at all – they’ll invariably turn up in your local small venue at some point in the not too distant future. I imagine they’re a cracking night out, lots of fun and they’re fine players, too, Pokey LaFarge is already a fan, and it only takes a couple of spins of “Money Isn’t Everything” to come to much the same opinion.
http://www.teapadorchestra.co.uk/
Tony S.