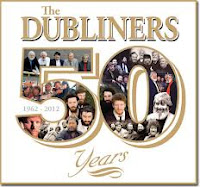 50 years, 50 tracks, three CDs – probably all the casual fan needs, and a bit more besides. As you can imagine, all the hits and big songs are present, from “Seven Drunken Nights” to their collaboration with The Pogues on “The Irish Rover”, and fans will be pleased to plug a few gaps and hear some of the later recordings.

It’s a timely collection as the band have announced their retirement, and will finish with a flurry of shows in Dublin at the end of the year, and a final appearance on Jools Holland’s Hootenanny show on the 31st December.
www.thedubliners.org
Phil S.