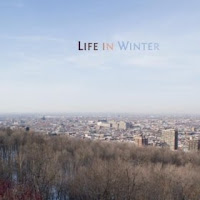 Montreal based Life In Winter seem perfectly aligned with the hugely popular alt. folk-rock genre, originally initiated (and latterly influenced) by groups like Crosby, Stills and Nash, and now best exemplified by million-sellers such as Fleet Foxes and their ilk. The five-piece, led by songwriter Sage Reynolds, have been honing their craft since 2007, and all those years spent rehearsing and practicing have paid dividends on their debut collection, an enthralling nine track effort, dripping with luscious harmonies and spirited, accessible tunes.

In fact, pretty much the first thing you’ll hear on their debut is blended vocals. The trio of singers, Reynolds, Sheenah Ko and Rich White have all the rich compatibility of a sibling troupe, and while wordsmith Reynolds is usually to be found at the front of the mix, it’s the interaction between the three where much of the magic happens. To reiterate, opening track “Flight” begins with a harmonious sweep of voices, and the effect is almost choral, before guitars and keyboards add ‘rock’ structure. It’s an elegant launch to a record that repeatedly hits polished highs. One of those is the outstanding “Lone Rider”. Delivered with pace, it’s propelled by a combination of needle sharp guitar and Reynolds’ uncompromising vocal. I could listen to it all day, and may just do so.
www.lifeinwinter.ca
www.facebook.com/LifeinWinter
www.lifeinwinter.bandcamp.com
Phil S.